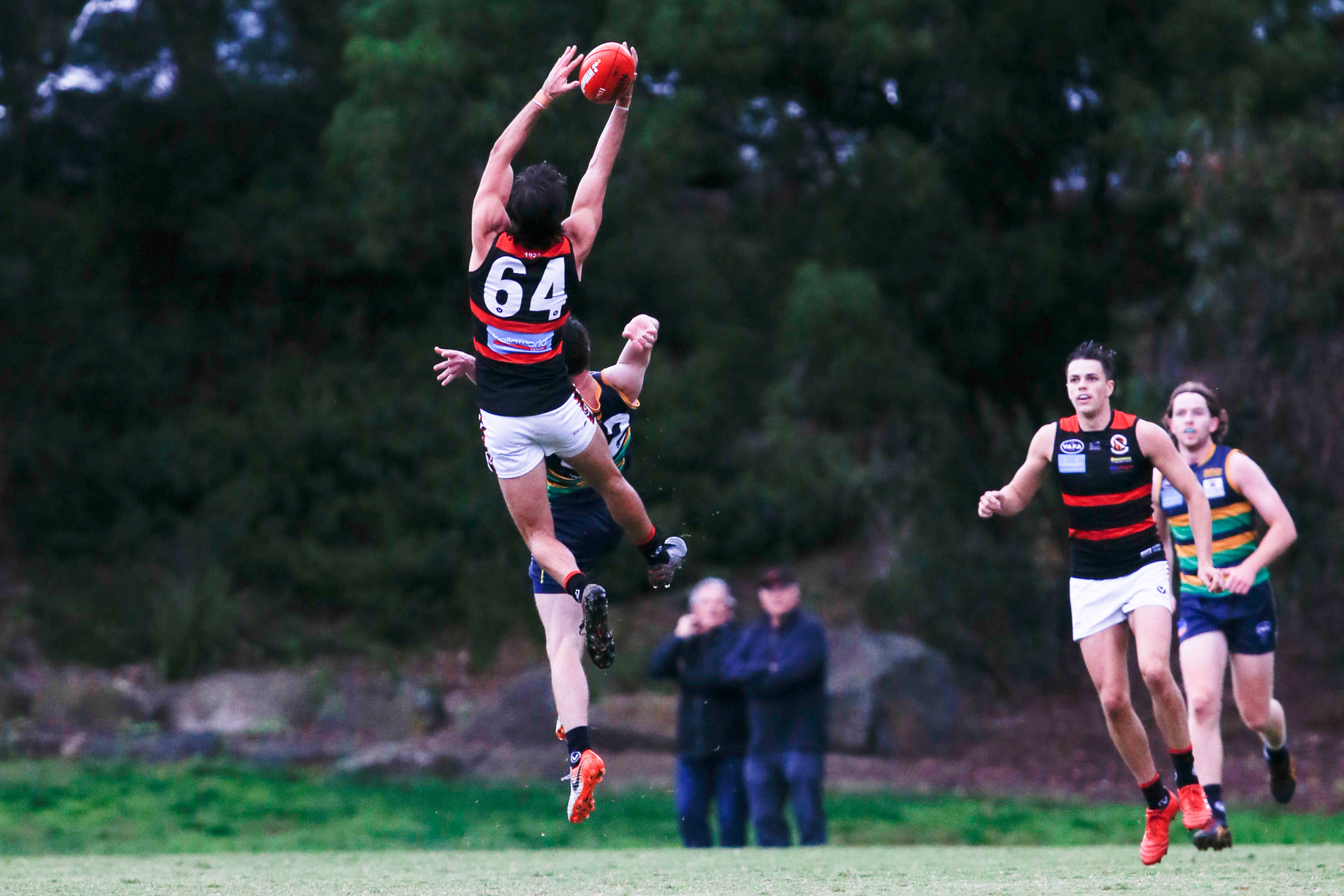 It was a tumultuous afternoon at TH KIng, with the tensions high all day. In a tight contest, the Reserves fell short, but the Seniors atoned by hammering the Halos.

St Kevin's entered Round 3 at 2-0 and given their enviable home record, were favourites against the Red 'n' Blacks. Old Xavs had not won on the King since 2016, and has suffered some big defeats there in the ensuing years.

This day, however, under grey skies and the SEC wires, things were different. From the outset, the Claret and Stout showed that they weren't a team to be trifled with. They got away quickly, attacking from the middle of the park, setting the tone for the game. The home team, adjusting to life after the estimable Anthony 'Plugger' Lynch, could not get its hands on the ball often enough to threaten, and when it did, the visitors had a back half determined not only to stop but to create opportunities. Four goals in the first term, including a beauty from Will Hams was a decent enough return given that the Kevin's didn't score one.

Seasoned observers of these contests know that a threatening lead over SKOB might just wake up its engine room, and steeled for a response. But any nerves among the quarter time huddle were confined to the spectators. The players went on with it the way they had begun. The Tricolours could manage only a goal in the second term, while the Xavs piled on six.  A lead of 53 points at the half seemed safe enough to most.

Kevs were goalless again in the third stanza, while Xavs collected three more. After six minutes, Denis Symeopoulos was smashed after taking a mark in an incident that should be referred directly to the tribunal. He regained his composure, took the fifty metre penalty and after the remonstrations ceased and the offending player headed for the sin bin, booted his third. Runner Pat Hawkins pulled him off immediately and the Sizzling Souvlaki ended his afternoon in the hospital.

Xavs conceded two goals in the final term, with St Kevin's stringing together their best passage of the afternoon to bring up their third and final goal. The visitors, however, outscored them again.

On an afternoon where the application to the task usually exceeded skill levels, the Xavs were powered by the engine room habitues - skipper Marcus Stavrou, the Riverview Rocket Dan Robinson and the Lanky Yank Jason Holmes. The backline held firm all afternoon and tamed a dangerous offensive unit. Special mention to debutant Jack Whitehead, who held down the key defensive post allowing Ryan Schoenmakers to play a more attacking role. Grant Valles is proving the Swiss Army Knife of this team, doing all that is asked of him and doing it well. Julian Soccio too showed polish in the forward half, while first-games Charlie Holmes and the courageous Jack Hewitt enjoyed some splendid moments.

SKOB was clearly not at its best, but the Xaverians can take plenty of heart knowing that its application, pressure and composure contributed much to the home team's diminished performance. But the road is long, with many a winding turn, as lyricist Bob Russell once wrote. Next week, a return home to welcome Uni Blues, who piled it on the Red 'n' Blacks in its last visit.

Xavs Coach James Byrne, who turned 43 on Friday and waited a day for a 71 point victory present, will not be dwelling too much on the team's 3-0 start that sees them top of the table, clear by a game and a healthy percentage. Nor will his players, who know that not to show up is to risk be shown up.

SKOB proved too strong for the Red 'n' Blacks in a scrappy contest at TH King.

The visitors led by a point at quarter time but could not gain any ascendancy over the home team. They were tied at the half and It stayed close for much of the contest, but the Tricolours kicked away in the final term to take the points in a low scoring affair.

Xavs are in third spot with a solid percentage as they prepare to meet arch-rival Uni Blues at Toorak Park next week.