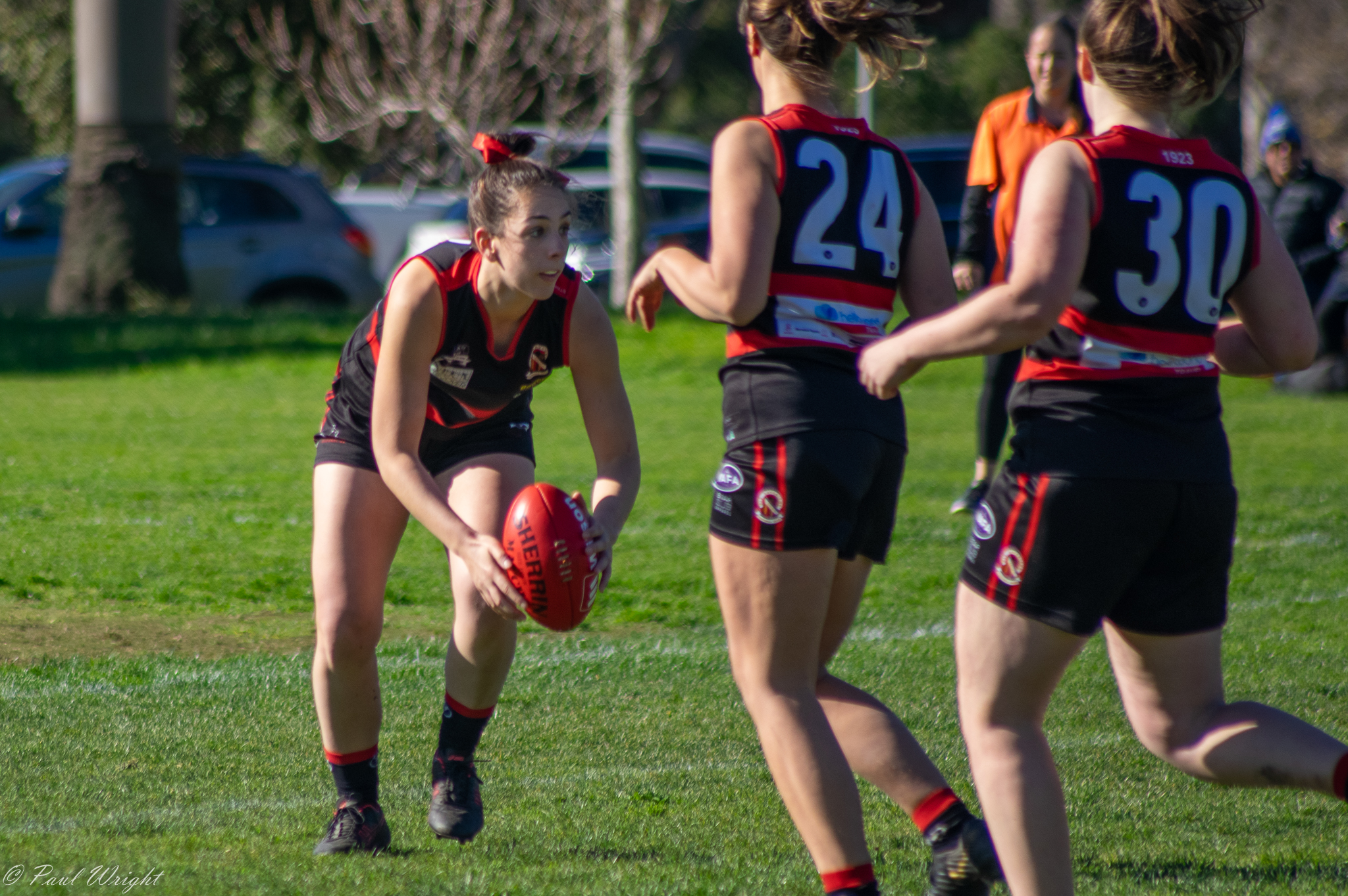 On Saturday at McAlister Oval, Cristina Sgarbossa will run out for her fiftieth game with the Old Xavs.

Steans, as she is universally known, was vice-captain of the inaugural WOX team in 2017.

She will become the first WOX player to reach the 50 game milestone.

Cristina came to the club with several Genazzano alumnae after excelling at netball and rowing.

Steans is much loved around the club and this year is captain of the WOX Reserves.

She has worn the number 5 guernsey in every game, though it wasn't visible one day early in 2019 when the umpires made the WOX turn their jumpers inside out to avoid a supposed clash of strips.

A number of her teammates have weighed in on her value to our club:

Steans has been a pillar for the Old Xaverians women's program since day one. She is humble, committed and a great club person! We are so lucky to have Cristina at the club and as one of our leaders. A true champion. Here’s to 50 more! – Gabby Golds, WOX Senior Captain

‍Steans is definition of Miss Consistency, her physical and mental consistency is inspiring and the reason she is the first to achievement this milestone. Day in, day out, you can ALWAYS rely on her, she is unstoppable. She has been here since the very first training with a smile and positive attitude since day one. Congratulations, Cristina – Grace Knox, WOX VC

The most reliable and committed player on the field and friend off the field. Steans, you bring the best vibe to WOX and we are so lucky to have you, congrats on the big 50!! – Indi Ellis

It’s been an absolute honour to play footy at the Old Xavs with Steans over the past 5 years. Her leadership on the field is reflected in all that she does for the team off the field. You always know that games, training and Xavs events will be an inclusive and welcoming environment when Steans is around. Congrats on your 50th game, legend! – Audrey Rhodes

Steans is the definition of a team player. When you’re out on the ground with Steans you know she will always have your back. She is a great leader an amazing listener and an even better captain. Congrats on your 50th, legend – Ebony Dwyer

Steans is a team player on and off the field. She is a great leader and always manages to get the team fired up, whether it’s a pre game pump up or convincing everyone to go the swan. Her commitment to training hard shows in her skills and attack on the ball. Congrats on achieving this massive milestone! - Alice Keith

It's always great running out onto the ground knowing that Steans will be out there leading by example. She is an incredibly hard worker, encourages those around her to strive to be their best and treats everyone with respect. Congratulations on 50 games! - Alyssa Privitelli

What an achievement by Steans! She encapsulates everything we desire to be in the WOX. Strong, aggressive and determined footballer on field, and a supportive mate off. Well done Steans - Gabby Henderson

Steans has been there since Day One. She was recognised early as a leader and displayed a commitment to learning the game and then improving her skills from her first appearance on the track. When we established the WOX, we didn't know where it would lead. Four years later, we look back at the growth of the program, and the immense contributions made to our clubs by WOX players. They have built a great culture, and Cristina has been at the forefront of that. Even more importantly, she has been a leader in ensuring that our women feel comfortable at our club and very much a part of the Old Xavs. Congratulations, Steans.

Her coach this year, Paul Newton, agreed with those sentiments.

From the first time I met Steans in the pre-season, it was obvious that she wanted to put everything in to her football journey, loved the footy mateship, had a real passion for the club and the WOX program and was a natural leader.  Steans plays CHB, competes fearlessly and is very attacking.  She demonstrates great courage and is a wonderful role model for her teammates and well-respected by the opposition.