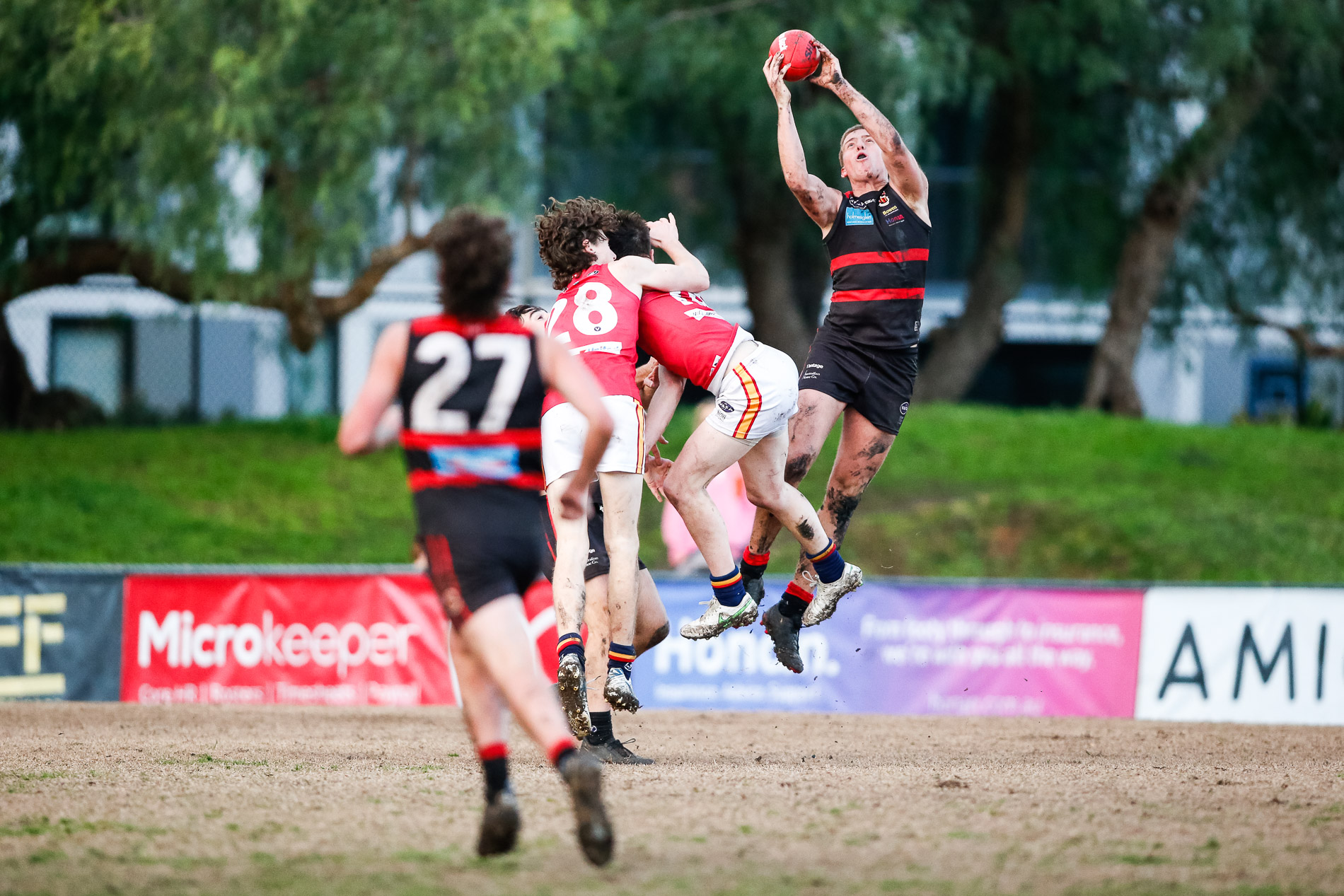 It was largely a day for scrapping, with high scoring rare across Melbourne. The U19 Premier team and the Crocs stayed unbeaten, while the Seniors and Reserves continue their climb. The WOX ran into a brick wall against St Kevin's.

It was just a month ago that Xavs had to struggle to knock over Old Scotch at Camberwell. The return bout yesterday was another fierce contest in conditions that weren't as friendly as they might have looked.

The X Men jumped early, with Delany dominant at the tap, and scored four goals in quick succession. Scotch was under immediate pressure, fumbling, over-using the ball and failing to mount any meaningful forays forward. As they entered time-on, the momentum swung in a moment. The Cards rammed on three goals - all from free kicks, and suddenly, there was life in the game.

The Reds added another - from another free - and hit the front briefly early in the second term and a slog ensued. Neither team gained much ascendancy in the second or third teams. Promising attacks were turned away, and a look at the scoreboard indicated the result was still in doubt. The Red 'n' Blacks, though, looked the more accomplished team, though it must also be said, the more frustrated.

Any early goal to Charlie MacIsaac gave the home team a 21 point lead and some promise of a scoring spurt, but it was the visitors who enjoyed the purple patch. Had they kicked straighter, they might have edged ahead again. After twenty minutes, the game was still very much in doubt, but the Red 'n Blacks raged. Xavs Richards and Tommy Hart found aerial supremacy up forward, and Xavs cleaned up with four quick ones to win their sixth for the season.

Skipper Stavrou was hounded most of the afternoon, but engineered plenty from the middle of the ground. Will Hams and Nick Guiney were strong in defence, the latter reminding some of Nick Wynne. Big men Hart and Grant Valles were effective all over the park, while Jack Hewitt, who is expert at taking balls from contests while at top speed, agin showed class.

Next week, a trip to St Kevin's College, where the X Men last played (and won) in 2005. Four points next week will make for a much tighter ladder, but the X-Men will know that their opponents will be a more skilled adversary than was the plucky Scotch, who should, nonetheless, cause some damage in this season's remaining 8 games.

What is not to like about a clash with the Cards, the winner taking top spot? If you're a Xavs fan, not much at all this time around. A month ago, the Red 'n' Blacks dropped a game to these same Caledonians, but yesterday, defeat was never on the cards.

Joey Ayton-Delaney sparked the assault, and Matthew Handley, who does not intend to go gently into that good night, monstered the Scotchies for eight big goals in a stunning display. The Red 'n' Blacks swept to the top with a comprehensive 97 point thrashing of the visitors.

Julian Gangi booted three and Ed Ralph two as the home swept aside the opposition. Tommy Simmons, playing in defence, proved his versatility with a strong performance.

A tough day at the office for the WOX, who struggled against inevitability all game long. Down this week, but certainly not out.