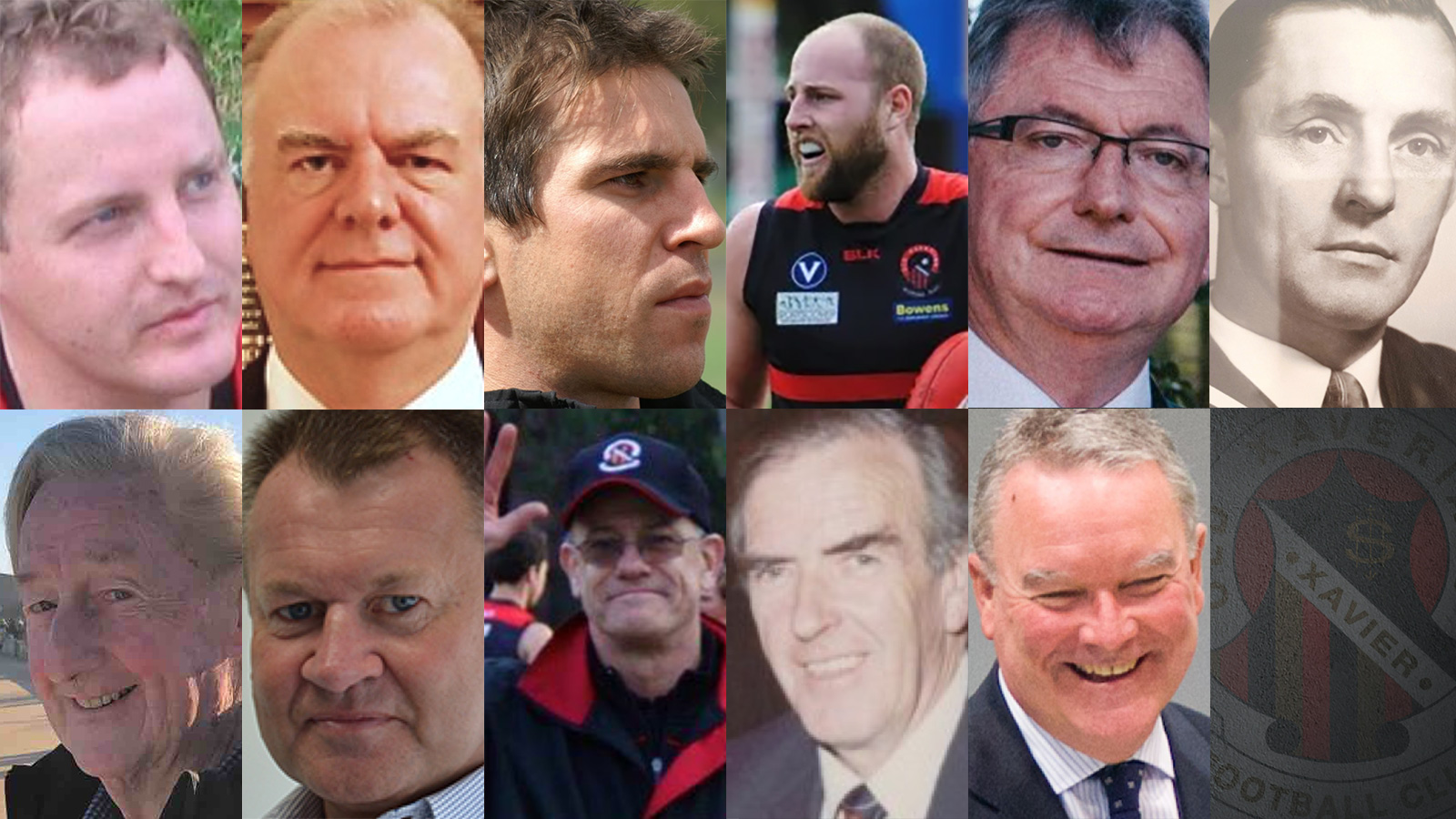 President Matt Cosgrave and Life Members Committee Chair announced today that the Old Xaverians will accord the honour of club Life Membership to eleven nominations approved by the current Life Members.

“The Life Membership sub-committee received a significant number of nominations. After investigation, a record number of these submissions were forwarded to the wider body of Life Members for their vote,” Cosgrave said.

“No new candidates for Life Membership were considered last year, but this year we have added eleven very worthy contributors to our number,” Jack Bowen said.

“For the very first time, we are recognising posthumously the great contributions of four club giants, three of whom served in the 1940s and 1950s.

All those nominated for Life Membership must meet the criteria set down for the accolade. Their nominations must then receive the support of at least 75 per cent of voting Life Members.

“I am sure when the Xavs’ community reads about the tireless and outstanding efforts of these eleven, they will agree that each of these are highly deserving of our club’s highest individual honour,” Bowen said.

“In recent years, we have honoured the new Life Members at the Presentation Night in September. With this function likely delayed for sometime, it is our intention to hold a special function some time next year to officially induct these eleven new Lifers,” Cosgrave added.

Honoured for their exceptional service to the club, the new Life Members are:

Debuting in 1937, Paul played in the 1938 premiership team, the club’s first flag. After just 25 games, he joined the Army in 1939. He saw action in WWII, and sustained dreadful injuries that led to the amputation of a leg. With his brother-in-law Peter Peppard, he was one of the prime movers in re-establishing the club after the War and getting a team on the field in 1946. He was President in 1950 and remained a strong influence for many years beyond that. Paul passed away in 1993.

With his brother-in-law Paul Lachal, Peter was instrumental in the reformation of the club after WWII, during which he had served in the Army.A fine player, he had a very strong hand in ensuring Xavs fielded a team in 1946. He won the Best and Fairest that year and won it again in 1947, when he captained the team. He was a player in the club’s 1948 B Section triumph, after which he retired because of injury. He served as President between 1951 and 1953, and was an influential contributor for many years thereafter. Peter passed away in 2007.

With an involvement that began in 1949, Michael was for fourteen seasons the club’s team trainer. For fifteen seasons, he served on the club committee, including four years as Vice President. During the 1950s, he led the charge to raise funds for the club. He was named Best Club Man in 1955 and was named trainer of the 75th anniversary team. Lefebvre remained an avid supporter and member of the Old Xavs until his passing early in 2021.

A great contributor to the club for many years Tony served as a team manager for four different teams, was awarded the William DentonTrophy in 2010. He was secretary of the club in 2011 and 2012. His committee contributions included arrangement of legal incorporation of the club and driving the club’s first Strategic Plan. He established the Toorak Park Users’ Group that has enabled greater cooperation between Orrong Road’s tenant clubs. Tony passed away suddenly in 2014.

He played just 33 games for the OXFC, but Jack nonetheless has been instrumental in much of the club’s success since joining in 1972. He joined the committee when the club was close to its nadir in 1973 and served for three years before being elected President in 1976 and 1977. He served again on the committee between 1979 and 1981, by which time the club had secured its first A section premiership. Jack has remained an avid supporter and member ever since, selflessly assisting the club with legal matters and advocacy at VAFA level.

Twice a senior premiership player in 1976 and 1978, ‘Bos’ managed just 23 games overall and a few for Carlton Reserves before injury got him. He served as a senior assistant coach for some years and has headed the hugely successful U19 program since 2009, delivering premierships and developing future senior stars. His enthusiasm for Xavs’ football is second to none and he has proved a brilliant sounding board for coaches and players alike. He was the recipient of the William Denton Sr Perpetual Trophy in 2014.

Serving the club as a player from 1981, ‘Ralph’ played 125 games at various levels. He then served variously as a senior assistant coach and Reserves coach from 1988-1992 and from 1995-2000. After stints in Sydney and Chicago, he returned to Melbourne and has performed forward scouting duties since 2017. He was the founder and driving force behind Croc Rock, which became Melbourne’s number one social event among footballers.

A speedy, fearless and talented player, ‘Flemo’ played in four(one U19 and three senior) premierships with the Old Xavs before getting his chance at AFL level with Richmond. He returned to the Xavs to play in the Red ‘n’Blacks’ 2007 win and led the senior team to a flag in 2009, which capped his 159-game career. He captained the Victorian Amateurs in 2009 to victory against the EFL. An outstanding leader who made his teammates stand tall, Tim was rarely beaten in a contest.

Hailing from Ballarat, ‘Turtle’ played with the Old Xavs in 2001-02 before taking a two-year spell overseas. On his return, he played another five seasons, being instrumental in premierships in 2005, 2007 and 2009. He won the Best and Fairest in 2008 and was runner-up in 2009. Twice he kicked ten goals in a game, once in a team that was defeated by 50 points. He represented the Big V. He served as OXFC senior team runner in 2010 and was a senior assistant coach in 2015.

Serving on the club committee for over a dozen years in three spells since 2002, ‘Fitzy’ was a Vice President in 2004. He established the club’s first website in late 2002, and currently maintains it. He has been a long-time Lugar editor, membership and database coordinator, event organiser and master of ceremonies at various lunches, dinners and presentation nights. He was the VAFA General Manager of Marketing and Communications from 2009-2012. He was awarded the William Denton Sr Perpetual Trophy in 2007 and served as club GM in 2019.

Such is the esteem in which Matthew Handley is held by all, he is the first current player ever to have been accorded Life Membership of the Club. ‘Chopper’ dominated the U19s in 2005 before ascending to the seniors in R4 of 2006, putting on a show in his first game and for many seasons since.For over 16 seasons, he has patrolled the goal front, with occasional stints on the ball, monstering opponents and booting more than 800 goals in over 250 games and five senior premierships. He has captained the VAFA representative team and worn the famous Big V jumper 15 times, and in International Rules games during the 2015 VAFA Ireland Tour. He was an assistant coach of the inaugural WOX program in 2017. Despite his extraordinary football CV, he has never sought guarantees, and in 2021 has played in the Reserves, inspiring younger teammates with his unselfish attitude, determined approach and great leadership.