A WIN FOR THE AGES

A WIN FOR THE AGES 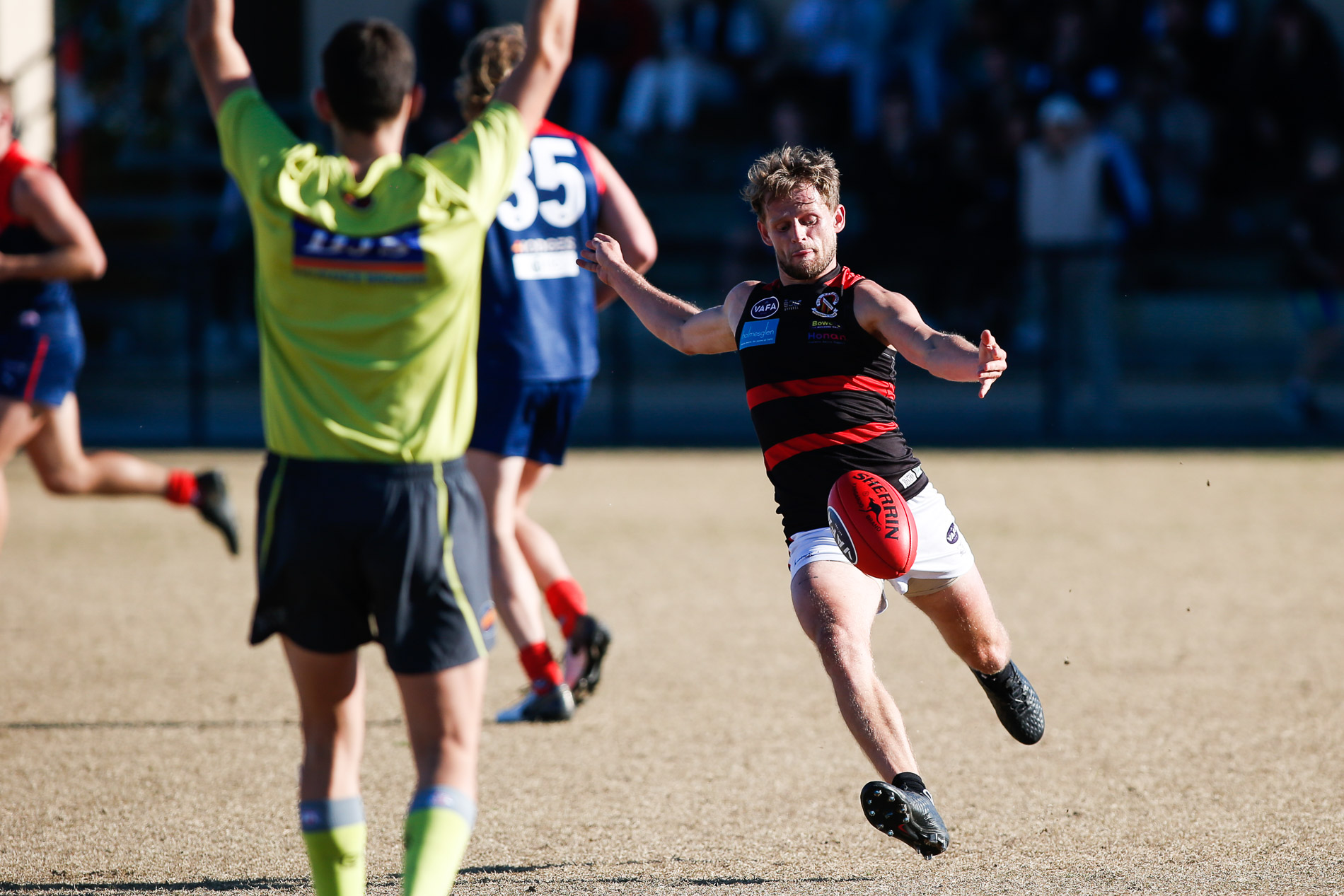 The Red 'n' Blacks, eager to erase memories of its three most recent appearances trackside, were up against it early. The Tonners kicked with the light breeze in the first term and threatened often. Establishing an ascendancy around the contest, the home team surged forward many times, but was frustrated by an organised and determined Xavs' defence. The visitors ventured forward occasionally, but their entries weren't pretty. Brighton's pressure was first class and they used the barbecue-side boundary to systematically run the ball away from the danger zone. At the end of the quarter, despite the absence of forward fire-power, the Claret and Stout would have been happy enough with the smallish deficit.

Their second term was more productive for both teams. The wind swung around mid-way and the Tonners kicked three vital goals late. They needed them, as the Xaverians found a way through the Brighton defence and slammed home six for the stanza as live-wires Mick Batten and Jack Hewitt proved dangerous while Schoenmakers presented as a strong marking target. Emotions spilled over and the quality of play reached new heights. The Red 'n' Blacks went to the sheds with the narrowest of leads.

Kicking to the Kostka end in the third term, the visitors dominated. The Red 'n' Blacks defence remained organised, the midfielders, hassled and pressured all day, emerged and began to dominate. Brighton managed just two forward entries for the term, but struck twice. Xavs, rampant at times, went in eighteen times for nine scores, and might have sealed the game but for some wayward goalkicking and bad luck. Three times in succession they hit the tall uprights, but the visitors led by 13 points at the siren. Still, there was confidence at the sizeable Claret and Stout lemon-time huddle that there was more in the tank.

So it proved. Six last term goals crushed the Tonners, with Xavier Richards on fire. Brighton's final siren shot missed and X-Men went off to savour their victory, their biggest win there in recent memory.

In the rooms, coach James Byrne began singling out a few for praise, but gave up when he realised he would have to mention the entire twenty-two. Indeed, it was a total team effort that won the day. Will Hams was at his smashing best in a defence that coolly repelled Tonner offences. Alex Trigar, Ben Banting and Jack Whitehead were strong in the air and the unflappable Jordy Kelly and Chris Margin anchored several offensive sorties.

Around the ball, Dan Robinson and Marcus Stavrou received plenty of attention, but willed themselves to go harder and stronger. Hamish Cullity and Hayden Troiani cut through with their speed and sure ball handling. Jason Holmes dominated the ruck contests against bigger bodies and provided plenty of opportunities.

Further challenges await. Xavs head to Elsternwick next week for a meeting with Old Melburnians, coached by old friend Paul Satterley. The Dark Blues will be desperate for the points, but the Claret and Stout has rarely turned down an opportunity to perform at their best at HQ. Old Brighton heads to Camberwell for a danger game against Old Scotch, who grow an extra leg on their home park. There are those who believe the Tonners have a game better suited to road venues, but the small Cardinal field is perhaps not one of those.

Chachi's Charges continued on their way with a victory over the Tonners.

Early inaccuracy saw the Red 'n' Blacks fall behind, but they smashed back in the second term to steal a comfortable lead at the break. Alec Spralja and Tommy Amad again played well and have found real consistency.

Will Golds kicked four, missed a sitter and took the Mark of the Year in an eventful game. James Dalbosco and James Langford served the cause with distinction, while Lucas Soccio hit the ball and body hard all day long.

Big Matthew Handley is finding his feet again and looks increasingly dangerous in a team that is performing pretty well.