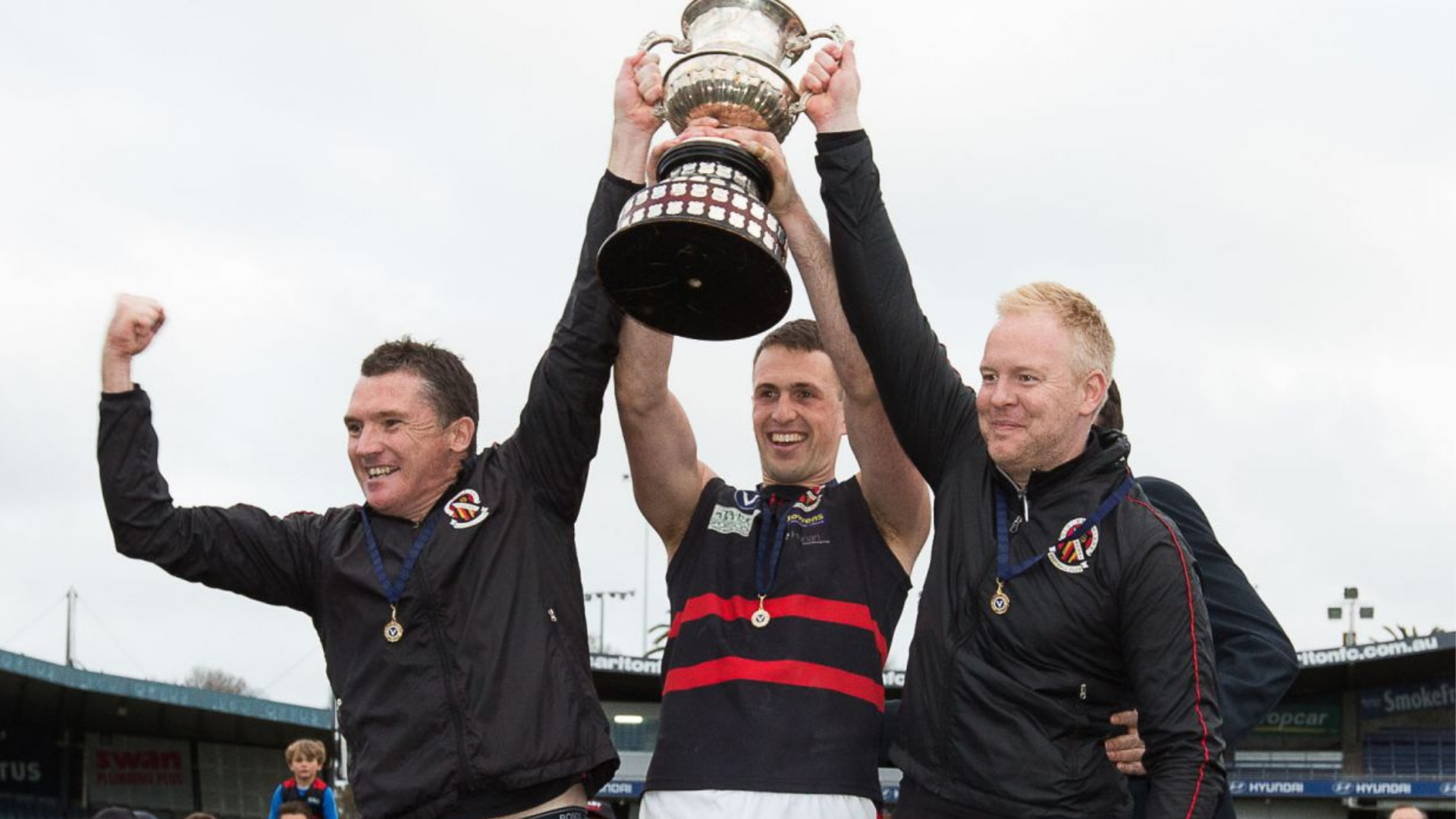 With the big premierships reunion just under seven weeks away, here is a short potted history of the OXFC’s A Section premierships.

Old Xaverians has chaliced fourteen times, behind only Collegians, which has won seventeen, though four of these were prior to Australia’s nationhood and nine since World War II. University Blacks has also won fourteen when flags won as University B are counted, with seven of these post-War.

Old Xavs first played in an A Section Grand Final in 1964, and lost narrowly to Old Paradians.

In all, the Red ‘n’ Blacks have tasted defeat in six grand finals. (Collegians has lost sixteen deciders, nine of these post-War, while Uni Blacks has gone down five times, and just once since the resumption after WWII.

Here are the Xavs’ victories in Premier (formerly A Section), beginning with its first L.A. Adamson Cup.

1981: Michael Green, the former Richmond ruckman and XC alum had coached the Xavs to a B Section premiership in 1980. The Red ‘n’ Blacks returned to the top tier and performed well. North Old Boys smashed the X-Men in the second semi-final, booting 30 goals, but Green’s team won the prelim and then turned the tables on NOBS to seize their first ever premiership in A Section. Skipper John Noonan was adjudged best afield.

1995: Xavs had been twice relegated to B Section since the 1981 triumph, but in came Barry Richardson, also a former Tiger. “Bones” had put the club on notice at the 1994 Presentation Night, demanding the dedication required to win flags. The Red ‘n’ Blacks were the best team all year and scorched Uni Blues in the Grand Final. The 84 point margin is the second largest on record. Michael Blood took the Jock Nelson Medal for BOG.

1996: Barry Richardson departed and former Saint Simon Meehan was named coach. The club hit the skids early and looked like being relegated when president Rob Ralph axed the gaffer. Nick Bourke took the coaching reins, and with a strong second half of the year, finished with the double chance. Xavs defeated Collegians in a low scoring affair in the Elsternwick wind and Michael ‘Horace’ Holmes won the Jock Nelson.

1997: Three in a row for the Xavs, as Nick Bourke’s team went back-to-back, winning another tight one, this time against Old Scotch. Michael Blood won his second Jock Nelson Medal.

1998: Tim O’Shaughnessy replaced Bourke at the helm as Xavs sought their fourth on end. Their grand final opponent was again Old Scotch, but this time, it was never close. Star on-baller Simon Wood received the Medal from the legendary MHSOB and Big V ruckman.

1999: O’Shaughnessy sought to match Nick Bourke’s back-to-back effort in the last season of the millennium. Matthew ‘Killer’ Bourke played his last game in the Grand Final, booting eight goals and winning the Jock as Xavs creamed the Dark Blues.

‍2000: The season was played without a break in order to finish before the Sydney Olympics. Xavs, with five consecutive premierships, fell to St Bernard’s in the second semi, but rallied in the preliminary to defeat St Kevin’s OB. The grand final was a wild but closely fought affair, but early in the last term, Xavs went berserk to secure their sixth consecutive flag, the third in a row under Tim O’Shaughnessy. Star forward Adam Jones took the Jock Nelson.

2003: Xavs’ run had ended with a controversial first semi-final loss in 2001 and a grand final loss in 2002. Tim O’Shaughnessy resigned and was replaced by Michael Sholly. A second semi-final loss to St Bernard’s dented hopes of a return to the dais, but the Xavs overcame Old Scotch in the preliminary final and then turned the tables on the Snow Dogs in the big one. Tim Ockleshaw won the Jock Nelson in a commanding display.

‍2005: Xavs had missed the finals in 2004. Michael Sholly was lured to the VAFA as its new CEO, and somehow, Barry Richardson was lured from retirement to resume coaching. Mid-way through the season, the Red ‘n’ Blacks looked unbeatable, but the wheels fell off as the finals approached. They lost to struggling Trinity in Round 17 and were smashed by the reigning premier and flag favourite Uni Blues at Toorak Park in Round 18. Xavs scraped in to the four, but looked out of sorts in the first half against Old Scotch at Box Hill.

Their third quarter effort was fair and their last, unbelievable, as they smashed the Caledonians. The preliminary final against Old Haileybury was close for most of the afternoon. The Bloods looked home, but the Red ‘n’ Blacks found the sticks a couple of times to get victory within reach. With less than a minute to play, Damian Lynch marked twenty metres out and slotted it home for the win.

The grand final against Uni Blues was a brilliant game, with the ‘Predators’ again emerging on top. Adam Chatfield won the Jock with a sterling game on the wing.

2007: Xavs had lost to Old Haileybury in the 2006 Grand Final and Barry Richardson, in his third year back, sought redemption. Old Brighton, in their first year in Premier section, set the pace, but the’ Bonesmen’ cut them down in both the second semi-final and the grand final, which was the coach’s swansong. Nick“Cadillac” Serafini won the Jock Nelson Medal.

2009: Simon Lethlean had taken over as coach in 2008, a season in which the Xavs were plagued with injuries. They finished third after beating Old Scotch in a memorable first semi-final. Xavs looked strong all year and clubbed De La Salle in the second semi-final. They looked certain to win the Grand Final until the last term when DLS suddenly hit its straps and but for some heroics in defence from rookie Nick Wynne, Xavs might have been defeated in this low-scoring, nail-biting affair. Luke ‘Ronnie” Howard won the Jock.

2010: Lethlean’s team seemed destined to finish third DLS kicked with the breeze in the final term of the preliminary final at a windy and cloudy Elsternwick. Somehow, the X-Men fought back to win, setting up a rematch with Collegians, who had won the second semi-final against them. It was another tense grand final, but the Claret and Stout broke it open late with some brilliance from Jon Mercuri. Ryan Colbert took the Nelson.

2013: Andy Gowers had coached the Old Xavs in 2011 and 2012, when the team finished in third and second place. Nick Bourke came back alongside Dom Berry as co-coaches. The 2013 team performed strongly all year with Matt Handley, Brendan Goss and Jake Williams causing havoc for opposing defenders. It won the second semi-final and grand final over St Bede’s/Mentone Tigers with some comfort. Chris ”Rolls Royce” Waller won the Jock.

2016: Pat Hawkins and Ted Woodruff were in charge as Xavs turned around an average first half of the season to win the flag against a highly fancied Old Trinity. After missing the double chance with a R18 loss to the Ts, the Red ‘n’ Blacks defeated Uni Blacks in the first semi, and Uni Blues in the preliminary, with Brendan Goss turning it on in the goal square in both finals. The Grand Final was played at Princes Park (Ikon) and was an arm wrestle all afternoon, but late in the piece, Jock Nelson winner Caydn Beetham booted a long goal to seal the victory and Xavs’ fourteenth A Section premiership.

Don't forget to book your seat for the massive reunion lunch on 20 August, as Australia's best Master of Ceremonies, Dermot Dann, leads the assembled through the triumphs and reveals the little-known, and some hitherto unknown, stories about these victories.