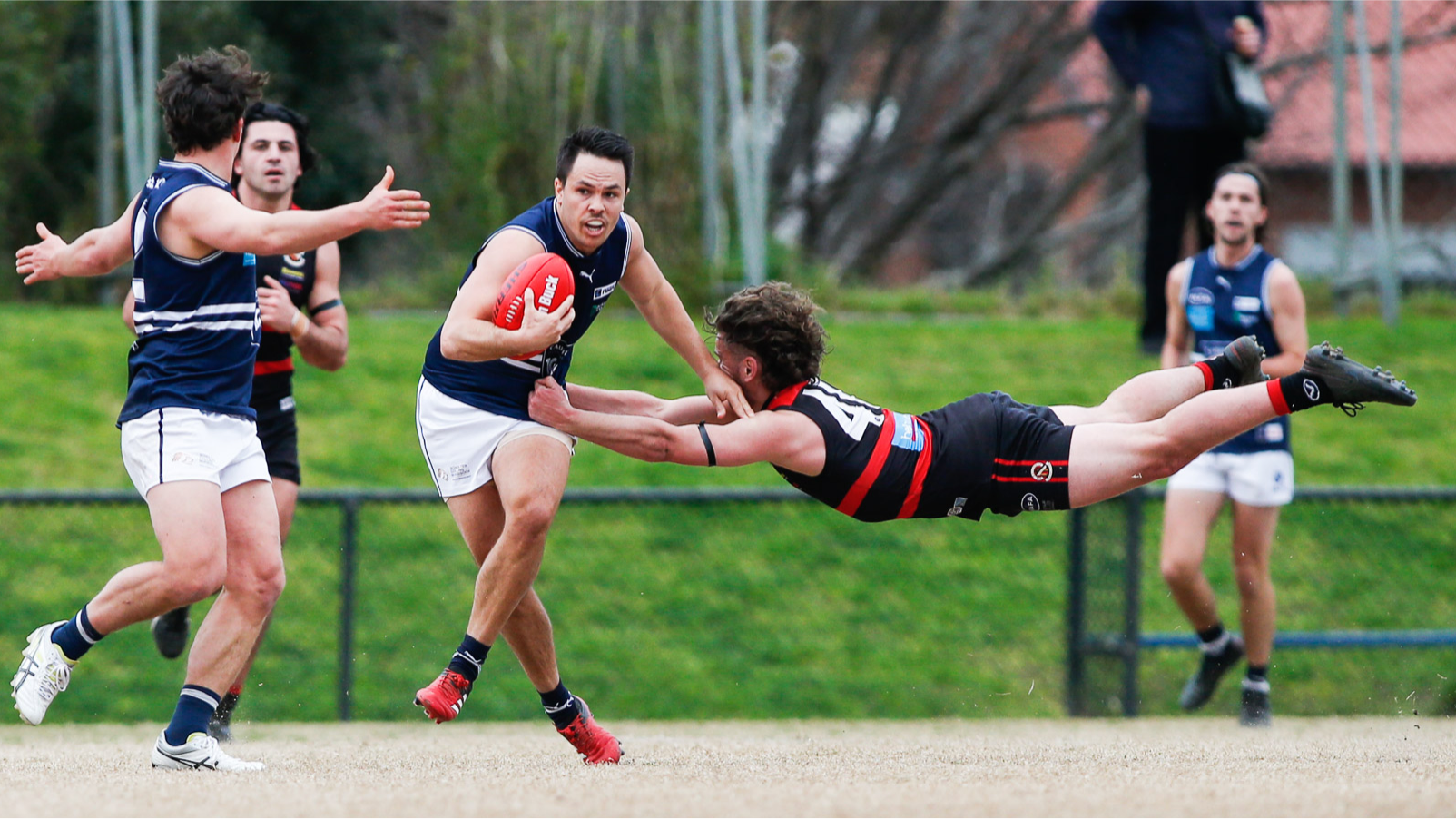 With two big wins at Toorak Park, the Red 'n' Blacks are top of the tables in the Premier and Premier Reserves competitions.

The Red ‘n’ Blacks romped at Toorak Park in their R14 clash, doubling Caulfield Grammarians’ score and winning by 57 points. The Fields, who arrived averaging 98.6 points per game, were well held by a Xavs defence that was, and still is, yielding just 57.

The Claret and Stout, exceeding its offensive average by three goals, went to the top of the table after SKOB fell to Old Brighton at TH King.

Xavs were all business from the opening bounce, attacking the Malvern Road goals with regularity but not accuracy. Jack Hewitt kicked their first for the Red ‘n’ Blacks after a slew of behinds and by the end of the term, the home team had broken it open. Hayden Troiani, Marcus Stavrou and Mick Batten saw plenty of it early, as the Claret and Stout blanketed the Caulfield midfield and kept their forwards quiet.

The visitors managed their first goal mid-way through the second stanza, but by that time, Xavs had built a substantial lead. The Red ‘n’ Blacks wasted several more chances before the siren sounded for the long break, with the home club in front by 38 points and star Caulfield forward Brett Eddy on the treatment table.

Ryan Schoenmakers looked dangerous early in the third, but it was Julian Soccio who snapped to bring up the Xavs’ first of the second half and seventh overall. Hamish Cullity raced down the middle just thirty seconds later to slot the home team’s eighth. At eight minutes, Jason Holmes took a strong contested mark and popped it through from thirty metres. Their best passage of the afternoon began at the back and ended with a Charlie MacIsaac goal at thirteen minutes. Seven minutes later, the Fields scored their second and then enjoyed a short ascendancy that saw them trailing at the lemons by just 45 points.

Signing off at three quarter time, the Caulfield radio man told his audience that the Blue and Whites needed just eight goals straight to win. “The Fields have the legs to do this. Xavs, a bit old and slow,” he offered.

Indeed, his theory was tested when the Fields booted the first of the final stanza. The visitors attacked again, but Xavs ran it away from the defensive goal square for another coast-to-coast goal from the Bustling Bootmaker Schoenmakers. A minute later, MacIsaac coolly finished. The Fields replied at 8 minutes. Then ensued a period of fiddling, indirect attack and over-use of the Sherrin, before Denis Symeopolous stuck one at 17 minutes. Caulfield, well behind, scrapped another reply within a minute and then another at 22 minutes, but the Sizzling Souvlaki snapped truly again to bring up the hundred. Schoenmakers was on the end of a series of handballs and popped through his third and Batten scored at 30 minutes before the siren ended the procession. Six goals for the term, not a bit old or slow, it seemed.

The defensive effort from the Red ‘n’ Blacks was strong all game long but for a few passages when the Hoop Sox found some precision. Jordan Kelly and Fraser Pearce shone, while Chris Margin played his best game of the campaign so far. Dan Robinson and skipper Stavrou were dynamic in the middle, rarely allowing an opponent a clean possession while accumulating plenty of possessions themselves.

Xavs bounced back into favouritism for a Toorak Park second semi-final, though they appeared sluggish at times after the three-week layoff. Blame the wind and lack of match practice for that. Coach Byrne can take some heart that his team closed down the Caulfield weapons from the outset of the game and systematically punctured their back six with quick ball movement.

Caulfield had strung together seven wins on end, which in VAFA circles, usually means defeat is around the corner. They will have learned more than they lost in their defeat.

Landrigan's Lads bounced away to an early lead and came hard late to thoroughly douse any threat from third-ranked Caulfield Grammarians.

With four to play, two of them against competition strugglers, the Reserves are favourites to win a home second semi-final. Still, there will be challenges over the next month and only a very solid August will see them in in the black shorts in five weeks.