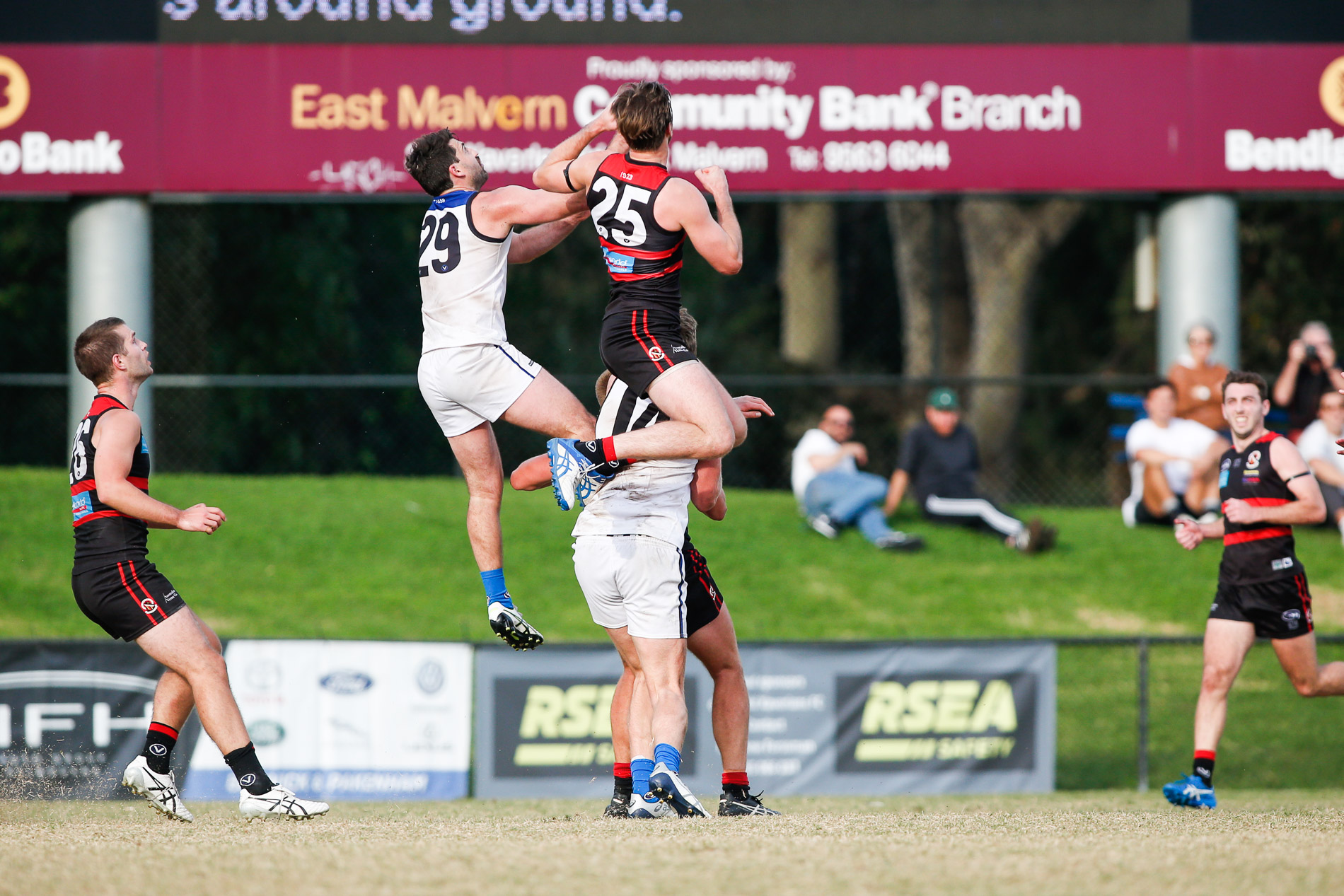 An afternoon of mixed fortunes for thr Red 'n' Blacks. The Twos monstered old rival Uni Blues, but the Seniors dropped the points after dominating early.

A promising but prodigal start wasn't enough to hold off Uni Blues at Toorak Park as the reigning premier fought back to take the points.

The first term was all Red 'n' Blacks, but the domination did not extend to the scoreboard, with several relatively simple shots going wide. Blues edged their way back in in the second term, and took control of the game in the third stanza.

With the Xavs bench short on numbers yet again, it seemed that the Varsity might cruise away to a comfortable win, but the home team found its form in the last quarter. When Charlie MacIsaac bombed a long goal on the run late in the piece, Xaverian hearts fluttered in hope, but the final siren sounded when the Sheerin reached its zenith at the ensuing centre toss-up.

It was a frustrating afternoon for the Claret and Stout, with injuries and a free-kick count that went Blues' way, particularly early in the piece. The shooting for goal was even more exasperating. At the lemons, Blues held a probable match-winning lead of 19 points, but still trailed on scoring shots.

Despite the loss, Xavs fans will be pleased with the form of several layers new to the team. Grant Valles looked very dangerous up front, Jack Whitehead on the last line was not over-awed by the big experienced tall-timber and Julian Soccio led a determined last quarter charge. Dan Robinson was perhaps the best of the midfielders, and Jack Noone was determined and dependable. Ryan Schoenmakers saw action at both ends of the ground and was a solid playmaker, while Charlies Holmes and MacIsaac had their moments too.

Still on top of the ladder courtesy of a strong percentage, the Red 'n' Blacks head to Glenhuntly to meet Caulfield Grammarians, who ploughed through the Daley and Old Trinity, booting twelve last quarter goals. Blues have gathered some steam and will be delighted with their win, but will also understand that a lot more went right for them than it did for the team they beat. They are at home against the Lions next week.

The Red and Blacks had fourteen goal scorers as they pounded traditional foe Uni Blues at Toorak Park.

Stung by a defeat in a low-scoring contest last week, Chachi's boys were cherry-ripe and opened the floodgates early. Alex Browne led the way and proven senior star Chris Margin was in everything. Up front, the scoring parade was led by the young Tommy Simmons and the ageless Matthew Handley, who took his tally to 804 goals. Charlie Whitehead, another of the budding livewires, turned in a solid performance too.

At 3-1, Caulfield Grammarians will offer more impediments than did the Varsity for the second placed Xavs.