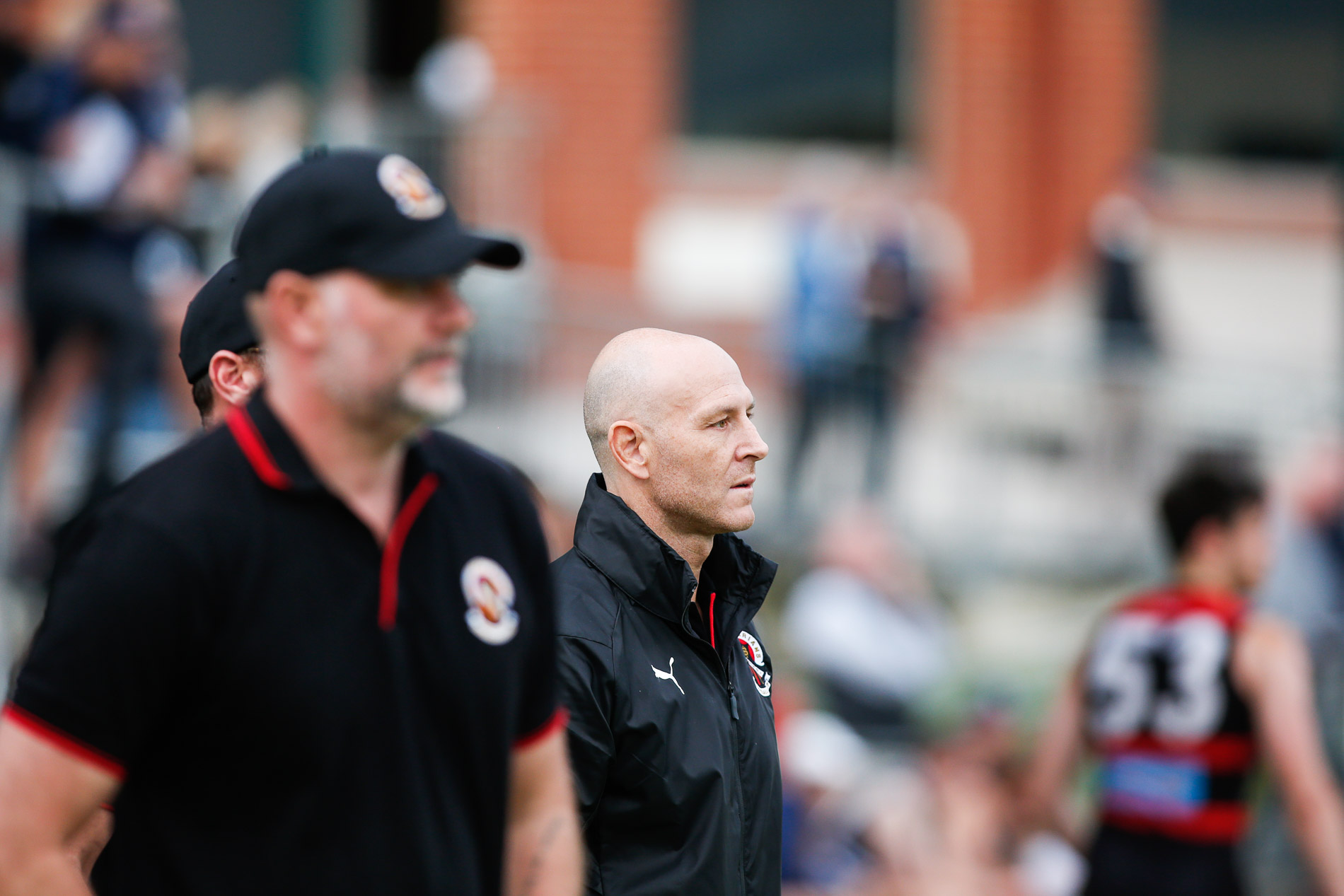 A trip to Caulfield to watch the thoroughbreds is usually a fun time natural, and one of the more pleasant outings of the autumn.

Saturday's visit to the adjoining Glenhuntly Oval proved otherwise, at least for the latter half of the afternoon.

Caulfield Grammarians had won their first the week prior and there was some confidence in the Fields' camp that they could do it again. The loss of two of their prime movers and shakers, Brett Eddy and Jon O'Rourke might have dampened this a smidgeon, but at 4:35 pm, it was the Red 'n' Blacks players who had hands on knees at the final siren, beaten by a goal by a team of youngsters who just refused to lie down.

The visiting Xaverians looked at their best early in each quarter. They put the score on the board, but inexplicably stopped to catch a breath, inviting the Fieldsmen to have a crack themselves. Not being the types to let an opportunity slip, the Blue and Whites hit back hard. Time and again, their persistence kept them in the game. They led at quarter time, trailed by three points at the half, then rallied again in the third to take a seven point lead to the lemons.

Most games ebb and flow like the tide, but this one seemed more a flood that kept on reversing itself.

Xavs hit back hard in the last, and looked to have sealed the game midway through the stanza. But again, the home team took over and regained the lead. Stung back into action, the Claret and Stout attacked relentlessly in the time on period, registering three scoring shots. They needed just two to land, but none did, even the set shots from directly in front.

The loss was just the Red 'n' Blacks fourth in a decade where it had scored 96 points or more. During periods, Xavs looked to be dominating and scoring goals with strong method, but Caulfield did the same when it seized the opportunity. The selection panel announced seven changes to the Xavs team on Thursday night, and there were two more before the first bounce.

While unsettled, the coaching staff would have been encouraged by the performances of Hayden Troiani, both in the midfield and in the forward line, the continued form of the G-Train Grant Valles and the debut of James Langford. There were some outstanding moments from the visitors, just not enough of them.

Next week, Caulfield must negotiate the perils of the Snakepit to keep their streak alive. Xavs can look forward to a visit from Collegians, with both teams at Toorak Park desperate to jump back on the winners' ist.

Landrigan's Line-up jumped away convincingly in the first stanza and it was well they did, as the Fields won both the second and third stanzas and halved the last. The Red 'n' Blacks won by 20 points, with James Dalbosco finding some ominous form in defence and big Chopper Handley splitting the sticks four times. Will Golds made his debut after returning from a bad knee injury and showed promise, while Jack Hewitt was lively and booted three.

While the performance will have enraptured few, it was enough for the Red 'n' Blacks to maintain their percentage advantage over the other teams. They sit poised in second, one game behind OMs. Collegians come in next week, and this will provide another excellent opportunity for a big win.