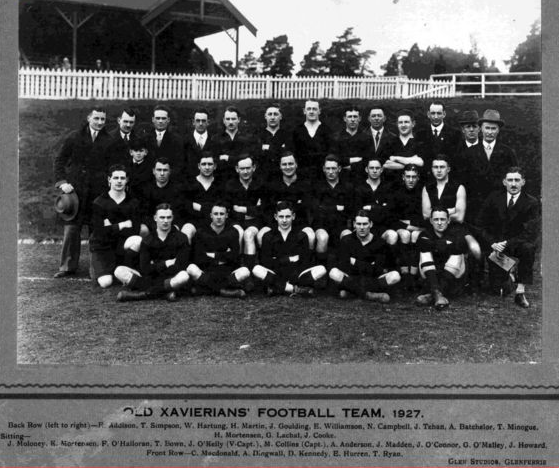 Despite the pessimism of the previous year, the club attracted a record attendance at the AGM on 16 March at Scott’s Hotel.  The club’s first life membership was awarded to Dr Allan Keane, founder and club captain for three years.

In all, 35 players wore the Red and Black that year.  Tom Ryan led the goalkicking with 32 and Alec Rogers won the Best and Fairest.

“From these and last year’s players, a fine side was assembled, and it opened the season by brilliantly winning the first match.  However, the smile of fortune alighted elsewhere, and from the very beginning, sickness, injuries and business causes played havoc with the team.  For one match, no fewer than ten players were incapacitated...

“By this series of misfortunes opened the door to our opportunity.  That traditional spirit of Xavier to ‘do or die’ was awakened, and in the words of the School song ‘Each fellow knew he could not fail’.

Father O’Keefe’s coaching and emphasis on teamwork is credited with a turn-around during the season’s second half in which the Xavs won six of nine to land the club in sixth spot.

Secretary Moloney extolled the virtues of the Amateurs: