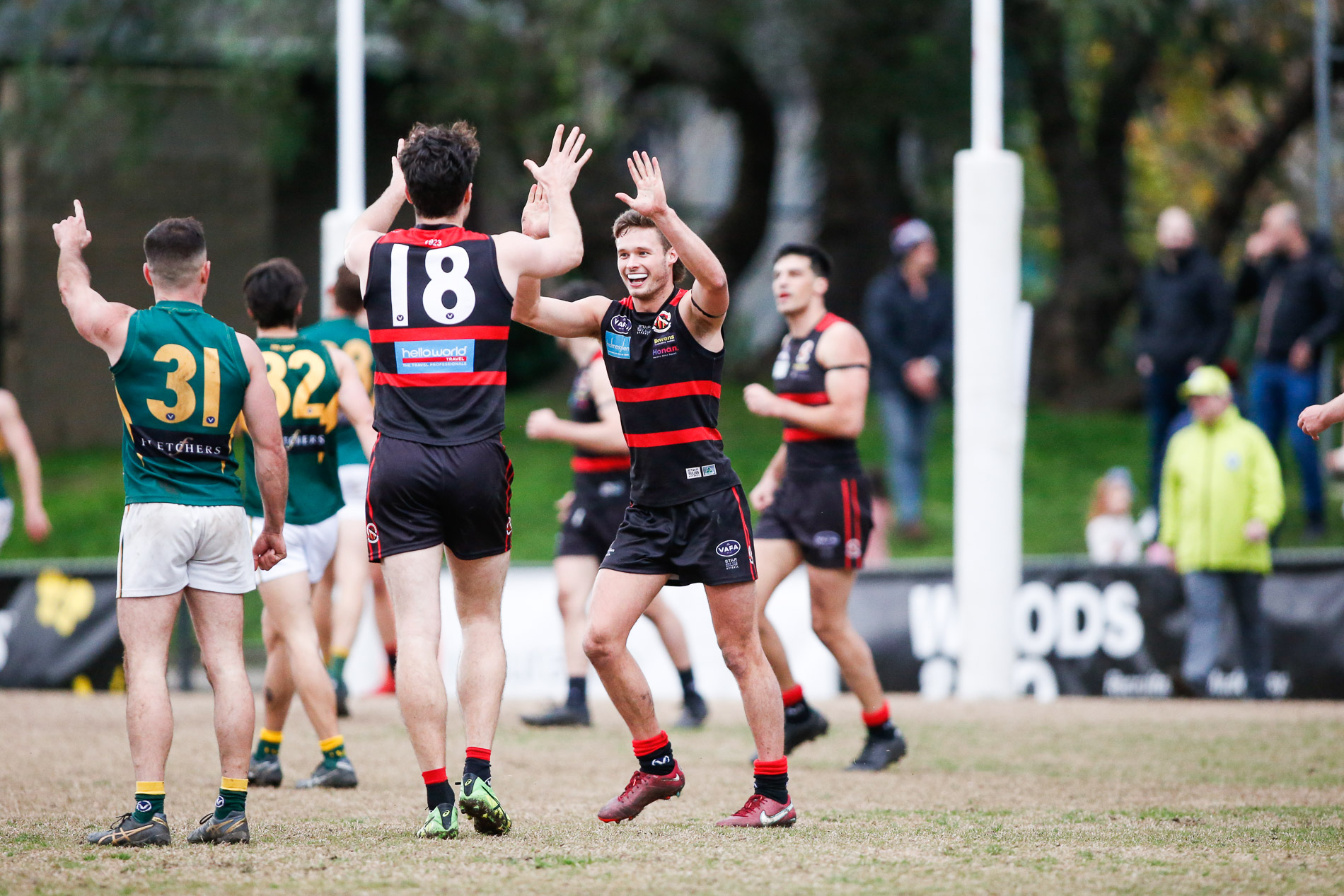 Round 9 is now behind us and we go to the June bye. Some big performances marked the weekend, with two players booting double figures. It was a weekend of high-scoring.

The Red 'n' Blacks completed the front nine with a crushing win over Old Trinity at Toorak Park. After a relatively even first term, the home team stepped it up a gear, with Marcus Stavrou, Dan Robinson and Will Goss dominating proceedings across the middle and some very tidy work in front of the sticks from Charlie MacIsaac and mick Batten.

With Xavier Richards, Billy Gowers and Grant Valles - all back in the team after layoffs of varying length - proving excellent marking targets, the Greens were under pressure all afternoon. After the long break, the Claret and Stout had the foot to the floor for a quarter and a half and blew the doors off the visitors.

At times, the home team linked magnificently, and many of their goals came from superb team play.

The win saw the X-Men go back into fourth position, ahead of Uni Blues, who fell to St Kevin's.

The Reserves recovered from a slow start to grab a six-goal victory over Old Trinity at Toorak Park.

Harro Bell nailed five in the win, with Matt Handley and Charlie Niall snagging three apiece. Best afield was Julian Gangi, who was creative all afternoon, while Jack Kennedy was impressive in the ruck. Charlie Knott and Tommy Amad proved strong contributors again in the win.

A dogged effort against one of the competition's best teams. Nine shots versus eleven is a pretty close contest, though more accuracy would have made it closer still.

A clear victory for the Fields, but full marks to the WOX who never chucked it in.

Unbeaten Od Xaverians slashed through OMs like a knife through butter at Stradbroke, with a power performance that stunned the visitors.

Three players kicked four, while Sam Hansen was best on the ground.

A narrow loss for Batty's Boys. Inaccurate kicking left the result in doubt until late in the piece, but the Red 'n' Blacks just couldn't get their noses in front of the Sharks.

Sam Gorman booted ten as the Threes walloped the Unicorns.

A narrow loss for the Blacks, largely a result of inaccurate kicking in the final term.

Another big win for the Reds, this time against Old Geelong. A big third term set up the victory in what proved to be a low-scoring affair.

Michael 'Zulu' Cain booted eleven in an extraordinary performance on the Crawford. The Menages smashed Uni Blacks all over the park, winning every quarter. The Xavs moved into top position as the Queen's Birthday break arrives.

Josh Lyon booted five as the Croc maintained their unbeaten run. The Roys led early, but the Lime Hose took over, scoring 12 goals to one after the first break.