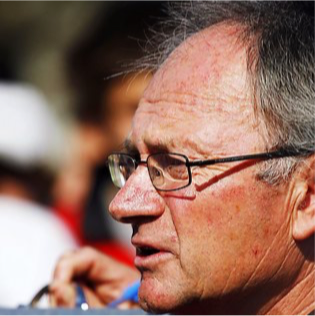 Tim O'Shaughnessy, an exceptional middle-distance runner in his days as a student at Xavier and beyond, had a long stint at Collingwood Football Club, where he was a fitness adviser, runner, and at one stage, coordinator of match day positional changes. He served the Old Xavs also, as team runner and chairman of the match committee and recruiter in the 1980s. Tim returned to Xavs and coached the senior team from 1998 through 2002, leading his charges to premierships in the first three seasons and finals in the other years. He was renowned for his preparation and methods, and his belief in his players, which proved a winning formula in 75 of the 101 games of his tenure.