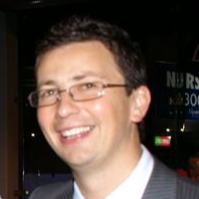 Luke Hannebery played 210 games for the Old Xavs, despite copping injuries that would have stopped most. 'Louis' was regarded as the toughest man in football, but he was also a skilled left footer (apparently compulsory in the Hannebery family) who played regularly in the seniors, but spent some time in the Twos. He served on the committee, and at one stage, he was vice-president, was always involved heavily in the social aspects of the club as well as contributing on-field as a layer or runner. Won the Denton in 2005.