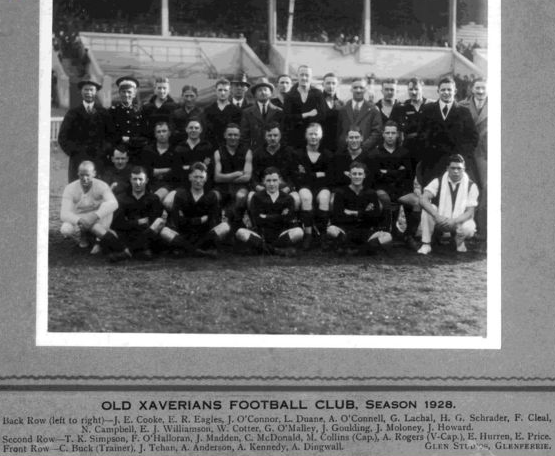 In their sixth season, the Old Xaverians finally tasted finals action. The road to the playoffs was not easy.

As the Xaverian trumpeted,

‍“ . . . on one or two occasions towards the end of the season it seemed that we were to be deprived from winning a place in the second round, still the fighting spirit – always prominent in Xavier boys when they are in a tight corner – came to the fore and we won through”

Fr O’Keefe had moved on to another Jesuit house, thereby vacating the sportsmaster’s job at Xavier and also the coaching job at the OXFC.

In his stead, due to the generosity of John Wren, the club secured the services of Jock McHale, who led training at Barkers Road each Wednesday.  Commitments at Collingwood kept him away on Saturdays, but his hard work, enthusiasm and advice proved valuable for the team performance.

Throughout the year, several players shone.  Bert Anderson was selected to represent Victoria and did so with distinction against South Australia in Adelaide. A Dingwall won the trophy for “best Club-man and most consistent player” and Frank O’Halloran won the most improved.  Jim Williamson, A O’Connell, A Rogers, and J Madden were also fine performers.

The fighting spirit of Xavier was not enough to overcome their semi-final opponent State Savings Bank, however, and the club’s first finals outing ended with a 13 point loss.

The club coffers were boosted by the receipts from the Annual Dance that totaled £19, which was then handed over to the Chapel Fund.  The Treasurer reported with some glee that £29 remained in the bank.

“The prospects for 1929 look brighter than ever and we are confidently looking forward to going a step further by winning our first premiership and once more playing in A Grade.”

But there was a caveat to that optimism.

“This result, however, can only be obtained by getting the support of all the Old Boys – both young and old – the former as players, the latter as spectators.  The class of football seen in the amateur competition is very high, and anyone who sees our matches always goes away feeling that they have seen a first-rate exhibition of good, clean football, where the game is played solely for the “games sake” and not, as is so often seen these days, for the gate.”